image THAT was a Panto!

This year’s Panto, Puss in Boots, has just finished performing.   And what a corker it has proved to be.   Telegraph Hill Centre are so proud to host this annual event and our thanks goes to the cast, production crew, front of house team, cake and cookie bakers from St Catherine’s and bar helpers at Hill Station who helped make it all happen.

Four years ago, Sanjit Chudha directed and produced the first Panto, Cinderella.  From a non-existent set, a few props and a lot of imagination, the Panto has grown each year to deliver a bigger and better show.   This year’s opus, Puss in Boots, was directed by Andrew Clarke and written by Ian Richardson.

The aim of the Panto was conceived as, and remains, twofold:

The cast and crew are drawn from the community and all give of their time freely.   Local writers have contributed the all too valuable scripts, by working collaboratively ideas are developed through the show.   Excellent directors, writers, set designers, make-up artists, costumiers, stage managers and set builders, a great lighting, sound and special effects team and a host of willing front of house helpers all pitch in.   This mix of continuity and fresh approaches involving up to 50 people each year has created some amazing shows – Cinderella, Jack & the Beanstalk, Babes in the Wood – and most recently, Puss in Boots.

What is certain is that there will be one – and it will be just grand!

Enjoy some pictures of the fantastic cast of Puss in Boots in action.   Download the PROGRAMME

Puss in Boots – December 2013 – the Wizard redeems himself

Will woos the Princess – kind of 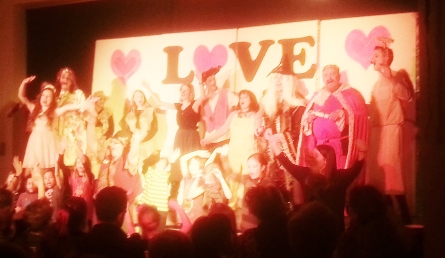 Puss and the Princess – fight